Bubble Wrap for Everybody! 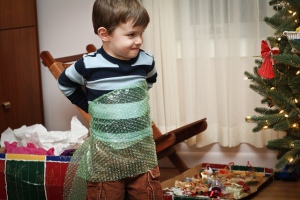 It’s no wonder today’s kids are so damn fragile.

Weber Middle School in Port Washington, N.Y. recently enacted a ban on all “hard” foot- and soccer-balls as well as baseball and lacrosse balls. Additionally, they banned the playground game of tag and the ability to perform cartwheels unless those activities are performed under supervision. Port Washington Schools Superintendent Kathleen Maloney told CBS New York that the policy changes were necessary because of a rise in injuries. Within weeks, Charlotte Avenue Elementary School in Nashua, N.H.  also barred the game of tag from its playgrounds.

In recent years schools, in the name of physical and mental health and safety, have also banned things such as celebrating Father’s Day because some kids don’t have fathers, using dictionaries since they contain inappropriate words, bake sales, dancing (Footloose!), and even the simple act of touching another human being.  If you have paid attention to the news, over the past few decades there’s also been a rise among children in allergies to items including pet dander and peanuts. Does anyone remember the “everyone’s a winner” fad that was ramrodded through the world of parenting about ten years ago? That was where even the losers in competitive sports got trophies because not doing so would psychically damage them. The latest fad has been the Helicopter Parent who constantly gives support and guidance to their kids to prevent them from making mistakes. Well, I’ve officially gotten to that point in my life when I have an opinion about this.

How many children have we as a society effed up over the past thirty to forty years? How many young- to middle-aged adults are walking around unable to deal with personal failure?  How many people are sent to the hospital each year for being in the same room as an open jar of peanut butter, or are unable to enjoy the companionship of a furry pet because they get hives? During my childhood I played outside, often alone, in the dirt. I even ate dirt, like kids used to, as well as paste right from the jar at school. I was around animals, got licked on the face and mouth at times, and had my hands all over the dog and cat at playtime. I ran a lot, played tag and touch ball games, fell and slid on my knees, and occasionally got into fights. I also broke an ankle, got some bloody noses, and lots of scrapes and cuts. Oh, and I watched the UNCUT Looney Tunes cartoons with the graphic make-believe violence in them. Other than some unrelated health issues I have no appreciable allergies, can discern the difference between real and pretend violence, and can eat nearly anything I want within reason without being admitted to a hospital or morgue. In other words, I am a relatively healthy ‘old school’ adult of the kind that’s rapidly becoming extinct.

Parents, it’s okay to love your kids and want the best for them. But loving them so much that you shield them from the ugliness and violence that’s ever-present in the world will do them irreparable harm. Studies show that kids who are too sheltered grow up to resent their parents, in addition to being unable to adequately navigate through life’s day-to-day difficulties. Studies are also showing that exposure to those “filthy, unhealthy” pets as well as eating a little dirt can spur the development of their immune systems and make them healthier in the long run. On the psychological level, if you’re conditioned to always win and you experience failure your world collapses. Imagine the poor people who eventually end up working for one of these perfectionist bosses who cannot tolerate failure!

So let your children develop healthy coping mechanisms and when they lose, let it be a life lesson: Don’t stop trying, just try harder next time. If they’re learning how to play ball, skate, or climb, they might break something. The kid will definitely heal, and will learn not to repeat that particular maneuver (or to do it more skillfully when they go for a repeat performance).  Let them be licked by the family dog, make a dirt sandwich, and get filthy when they play. Oh, and if they’re writing with their left hand and not their right, don’t force them to use the “correct” hand. As long as their handwriting’s readable why should it matter? Instead, encourage them to use both and you’ll have someone who can function well if either hand is ever broken.

Until our society stops being so litigation-conscious things may not change much. However, as parents you can do your part by letting your kids just be kids. And when your local Board of Education comes up with a boneheaded ban on a harmless normal activity, stand up and call it what it is: stupid, fearful B.S. If you let them get away with it, then next year’s school uniforms just might be made from bubble wrap.